Heddon was one of the world's largest tackle manufactures having its start in Dowagiac, Michigan sometime in the late 1890s.  James Heddon was initially a lure maker but decided to add reels to his fishing tackle line in 1917.  Heddon's early reels were extremely well made so as to compete with the best reels being produced at that time.

Later Heddon reels were mass produced and are not as collectible as their early German silver casting reels.

CLICK HERE - to return to our - CASTING REEL GALLERY 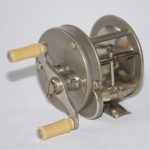