Made in Miami Florida by Bob McChristian (Capt. Mack) Seamaster fly reels are considered to be some of the finest salt water fly reels ever produced.  McChristian ran "Capt. Mack's Tackle Shack", a well-stocked tackle shop in Miami Florida in the 1950's.  A talented machinist, McChristian started making high quality spinning reels in the 1960's.  These spinning reels were in high demand and soon the wait for one exceeded a year.

Fin-Nor came out with their direct drive "Wedding Cake" fly reel in 1967 and McChristian decided to shift gears and produce an anti-reverse fly reel for anglers who preferred that style of reel.  His first model was dubbed the "S Handle" reel and it came in both a Salmon and Tarpon size.  Later McChristian redesigned his anti-reverse reel and added a Marlin size to the line-up.

For more information about Seamaster reels please refer to:

Seamaster in our - SPINNING REEL GALLERY

Click Here to return to our - FLY FISHING REEL GALLERY 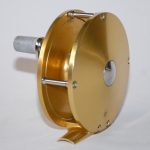