Hardy's first big game reel was based on the Australian "Andreas" patent reel which was a single action reel with a 6-inch diameter and a narrow spool.  Hardy dubbed their reel "The Tuna" and it made its debut in 1921.  By 1924 Hardy had changed the reel's name to "The Fortuna" and added two smaller sizes; a 3 1/2-reel and a 4 1/2-inch reel.  A year later the 5-inch "Fortuna" was added to the lineup.

Eventually, the big game versions of the "The Fortuna" reel were made in the 6-inch, 7-inch, 8-inch, 9-inch and, 9-inch wide sizes.  Later, Hardy offered a monel version of both the 9-inch and 9-inch wide Fortuna reels.  All four models of the 9-inch Fortuna reel had the option of adding an auxiliary handbrake which could be used by an angler to apply additional drag when needed.

Hardy's also built the first two-speed big game reel, the brainchild of New Zealand big game angling pioneer, C. Alma Baker.  The reel was named the "Alma".  The Alma was originally made with hard rubber side-plates, however, after only a few reels were produced, the side-plates were changed to aluminum.  The hard rubber version of the "Alma" reel is quite scarce.

Hardy produced another 1 to 1 big game reel which they named the "White-Wickham".  This reel had 8-inch diameter side-plates and a narrow spool like the Fortuna.  The White Wickham did not sell well and Hardy's records indicate that only three reels were ever produced.

In the mid-1930s Hardy's built a multiplying big game reel in conjunction with world-famous author and angler, Zane Grey.   Grey insisted that the reel should be made of the finest materials obtainable and the reel was dubbed the "Zane Grey" reel.  The Zane Grey reel was Hardy's top of the line big game reel and came equipped with a star drag reel and a frame made of monel.  Hardy offered the Zane Grey reel in sizes; 3 1/2-inch, 4 3/16-inch, 5-inch 5 1/2-inch, and 6-inch.  The Zane Grey could also be special ordered in the 7-inch and 8 1/2-inch sizes.  All Zane Grey reels came in a fitted leather case which included a grease gun, an oiler, and tools.  The Zane Grey reel was the most expensive reel that Hardy ever produced and they are highly prized by collectors today.

Hardy briefly resurrected the "Zane Grey" line of reels in the 1980s.  This updated version had fatal design flaws in the drag and a prohibitive price tag which ensured the reel a speedy demise.

Hardy Bros. is still in business today and their reels, new and old, command respect from both anglers and collectors alike.

For more information about Hardy Bros. reels please refer to:

CLICK HERE for HARDY BROS. in our - CASTING REEL GALLERY

CLICK HERE for HARDY BROS. in our - SPINNING REEL GALLERY 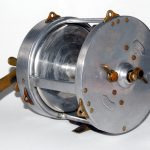