Edward vom Hofe grew up in Brooklyn New York and was the son of reel maker Friedrich vom Hofe and brother of reel maker Julius vom Hofe. Edward started building reels as an apprentice to his father in the mid-1860s and established his own reel making company in 1867. Edward went on to produce some of the finest fishing reel ever made right up until his death in 1920. After Edward's death reels marked EDWARD VOM HOFE continued to be produced by his sons, Edwin and Clarence, up until 1940.

Edward had started tarpon fishing in Florida in 1888 and claimed to have never missed a season thereafter. Having fished for tarpon himself, vom Hofe had a unique understanding of the frustrations of tarpon anglers as well as the shortcomings of the tackle at their disposal.

Up to this point, the most effective drag mechanism at the angler’s disposal were simple strips of leather attached to a reel’s rear pillar which the angler pressed up against the outgoing line in an attempt to slow the run of a fish. Because these early reels had no anti-reverse mechanisms their handles would spin backward during a fish’s run resulting in mangled knuckles and broken fingers as the unfortunate angler tried to regain his grasp on the knob while fighting a fish.

Vom Hofe’s first-hand experiences with tarpon in Florida motivated him to develop the first modern internal friction style drag which he patented in 1902. This innovation allowed the angler to adjust the tension on the spool by turning a spanner wrench underneath the handle on the collar of the reel. This reel eventually became vom Hofe's "Universal Special" model "501" reel. Although this was a great help to the angler, the drag could still not be adjusted while fighting the fish and therefore it was still a far cry from the perfect fix.

Vom Hofe's line of larger big game reels was named the "Commander Ross" reels after J. K. L. Ross of Montreal Canada. In 1911 Ross landed a 680-pound bluefin tuna, the first ever captured on rod and reel, at St. Ann's in Nova Scotia.

It took Ross 4 hours and 45 minutes to land this monster and he did it with and Edward vom Hofe "Special Celebrated Bass, Tarpon, & Tuna Reel" the model 501 "Universal Special" in a 9/0 size.  This was considered quite a feat as the reel did not have an adjustable star drag.

The first "Commander Ross" reels had both a star drag and an anti-reverse mechanism built into the reel. Later a click button was added then replaced by a rear mounted rim throw that operated the click. The final addition to this highly regarded big game reel was the addition of a free-spool mechanism that was operated from a rim throw mounted on the head-plate.

Edward vom Hofe's reels were considered some of the finest made in their day and today are considered highly collectible. 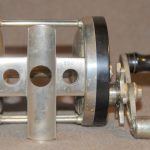