In the early 1930s, Fred Grieten was the owner of the Fin-Nor Machine Shop in Miami, Florida where he performed auto and boat repairs.  In 1933 Capt. Lloyd Knowles dropped into his shop with his latest project, a big game reel.

Knowles, a Miami fishing Captain, had designed a massive big game reel to stop the large bluefin tuna that were migrating off the Bahamian island of Bimini just 50 miles away.  Knowles, lacking the skills needed, wanted Grieten to machine all the parts for the reel.

Grieten did all the machine work for Knowles's reel which accounted for $215.00 of the $339.00 it cost to produce.  After completing only three reels Knowles decided to discontinue the project.  Grieten's curiosity had been aroused by Knowles's reel and he set his mind to the task of producing a reel of his own design that would be capable of stopping a giant bluefin tuna.

Grieten decided to make a large big game reel that incorporated the automobile drum style band brake principle into his reel's drag system.  Capt. Tommy Gifford and Michael Lerner took the first 15/0 Fin-Nor big game reel to Nova Scotia in 1935 to give it a test.  Lerner and Gifford proceeded to catch a great number of giant bluefin tuna and proclaimed the reel a great success.  Grieten started selling his 15/0 tuna reels in 1936 and demand was high as the reel proved to be a reliable workhorse.

The first model reel had a 1 to 1 ratio of retrieve with its drag system built into a housing that spins interdependently of the side-plate.  The reel came with a second handle that attached to a spline that protruded from the reel's rear side-plate.  This second handle would allow the angler to reel with both hands at the same time but it could be easily removed if the angler only wanted to fish with one handle.  Grieten also produced a narrow spool version of this reel which held less line, however, retrieved the line at a faster rate.  Within a year Grieten had added a large 15/0 multiplying reel and a 15/0 double handled two-speed reel to his big game fishing reel line-up.  About the same time that Grieten came out with his two newest reels he was involved in a patent infringement lawsuit with California reel maker Arthur Kovalovsky.  Grieten was forced to change his reel's design so he updated and internalized the drag system on his reels giving them the classic look that carried on well into the 1990s.

In 1939 Grieten introduced two new reels, a 12/0 size reel and a 10/0 size reel.  Both the 10/0 and the 12/0 reels could be purchased with or without the second handle option.  In 1939 Fin-Nor stopped making double handled reels when the IGFA deemed them unsportsmanlike and outlawed their use.

Fin-Nor suspended its reel production during World War II but remained operational, undoubtedly manufacturing materials for the war effort.  It is believed that Grieten was doing sub-contracting work on Frank O'Brien's defense contracts.  O'Brien was the owner of the Miami based Tycoon Tackle whose rods were most often paired with Fin-Nor's reels.

Soon after World War II ended Grieten discontinued the 15/0 size reels and added the 9/0, 6/0 and 4/0 size reels to his line-up.  Grieten sold Fin-Nor to a man named L.S. Guetti, who in 1945 incorporated it under the name of Fin-Nor Machine industries Inc.  After producing an unknown number of reels that were not up to par with those built by Grieten, Guetti defaulted, and by August of 1947, Fred Grieten had reinstated his Fin-Nor Machine Shop, Inc. by paying three years back fees to the State of Florida.

In 1956 Fin-Nor and Tycoon Tackle were merged and incorporated under the name Tycoon/Fin-Nor.  In 1957 the company was sold to Miami based Southern Tackle who in turn sold the company to Henry Breyer III in 1964.  Fin-Nor's line of big game reels continued to be built in Miami until about 1992 and although the original reels have since been discontinued the Fin-Nor brand is still around today.

For more information about Fin-Nor reels please refer to:

CLICK HERE for FIN-NOR in our - FLY FISHING REEL GALLERY

CLICK HERE for FIN-NOR in our - SPINNING REEL GALLERY 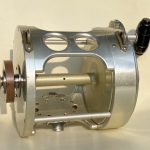